Canning the Future: A Look Inside the Canning Process with Crown

Crown Holdings is one of the oldest surviving supporters of the beer industry. William Painter founded Crown Cork & Seal Company in 1892 to monetize patents for his new invention—the crown bottle cap for carbonated beverages. Within a decade, Painter had invented several devices that increased the speed and ease of sealing bottles with crown caps, including a foot-powered crowner device for bottlers.

Today, Crown is an $8 billion dollar company operating 154 plans in 42 countries. While their focus has shifted somewhat—they now manufacture one out of every five beverage cans used in the world—they still produce crown caps.  So you can imagine my excitement when I got a chance to sit down with two of Crown’s top executives to learn about the canning process.

Jan Dunphy (Director of Sales) and Andy Navarro (Director of Customer Technical Services) took time out of their busy schedule at the Craft Brewers Conference in San Diego to share how they’re helping Craft Brewers convert to cans with solutions that fit the craft community’s size, style, and budget.

Working with Craft
Today Crown works with nearly 100 Craft Breweries throughout the country, including Stevens Point, Sly Fox, and Wachusett. But what’s impressive about Crown isn’t the number of small breweries they work with, but the level of involvement they have in the process and the changes they’ve made to their business in order to accommodate the needs of Craft Brewers.

While working with cans is more efficient from both a cost and environmental perspective on a long-term basis, the conversion does take some getting used to 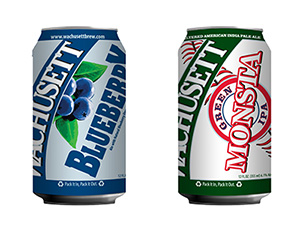 noted Navarro. Understanding the differences in format—cans have a larger printable surface area than standard bottle labels—and the printing process itself is critical to the success of the converting from bottles. ”The biggest piece of the puzzle that craft brewers need to understand is the artwork process,” said Dunphy, “we try to walk Craft Brewers through that process and make it as easy as possible.” The process of ordering cans with new artwork takes about six to eight weeks, though Crown works closely with their brewery customers to ensure that process happens as efficiently as possible.

Similarly, Crown is working hard to decrease the minimum batch size that Craft Brewers need to order. While most can manufacturers have minimum order sizes akin to multiple truckloads, Crown has scaled that requirement to meet small brewers’ sizes and budgets. “We can easily do less than a truckload,” said Navarro, “it’s a 10-pallet minimum run and we also do half-pallets since some of our customers have told us that half-pallets are easier to work with.”

Sustainability
When I asked them what else they wanted brewers and drinkers to know about the canning process, both Dunphy and Navarro were quick to emphasize the sustainability of cans compared to bottles. Craft Brewers who can have long touted the sustainability and efficiency of working with cans compared to bottles. Anyone who pays attention to this industry knows that cans weigh less and that, over the long term, that decrease in weight reduces fuel costs significantly.

What most people don’t know, however, is just how sustainable cans are from a recycling standpoint. “The can that you’re drinking today can return to the shelf as another can in as little as 60 days” said Navarro. In fact, aluminum recycling is so efficient that it saves 95% of the energy needed for primary production. Perhaps most important, aluminum is 100% recyclable, meaning that the metal can be continuously reused with no degradation to the materials.

When we talked about Crown’s strategy for working with Craft Brewers and the next steps they planned to take, it was clear that they understood the community culture just as well as they understood the technical aspects of canning. ”We’ve decided to take the smaller orders, to work more closely with the brewers throughout the process, and we’re seeing how we can help them grown and get there with them” said Navarro. ”Personally, I love the enthusiasm we get from these Craft Brewers,” Dunphy said, “they’re entrepreneurs who have this great passion for what they do, and we’re here to help.”

If the praise we heard for Crown from brewers at the conference is any indicator, Crown’s pay-it-forward philosophy will continue to help them succeed.

Other posts by Tim