Bringing Australian Beer to the US: Interview with Mountain Goat 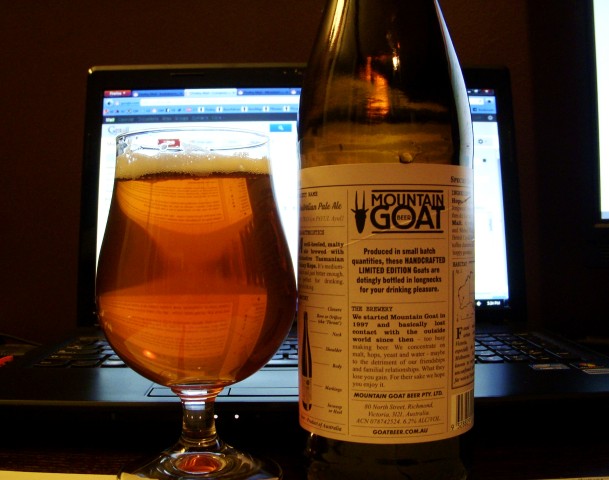 A few months ago, we were introduced to a brewery from halfway across the world just as they were entering the US market. I hadn’t really spent much time thinking about craft beer in Australia…it just seemed like one of those places that didn’t “get it” when it came to craft beer, and at first, I worried that the beer would have a tough time competing against so many of the high quality US craft beers. Man, was I wrong. I had the pleasure of interviewing Dave Bonighton, Chief Brewer and Co-Founder of Mountain Goat, as well as trying their first two beers for the US: The Australian Pale Ale, and the Hightail Ale.

Rich: So what’s the story? What got you guys interested in starting a brewery, and what was it like starting out?

Dave: Two Goats, plenty of beer, no money. That’s were it started. My business partner Cam & I discovered a love of craft beer in Canada & the US respectively back in the early 90′s. There was just no craft beer in Australia at the time, so we decided to give it a crack and do it ourselves. For the first couple of years I swear we were the only ones drinking the beer, cause whenever a bar re-ordered, we’d been in the night before! Genius sales strategy, if a little expensive. So it was really hard starting out in a town that didn’t even know what craft beer was, let alone what an IPA, Hefeweizen or Porter was. But we persevered, and we’re still here today, 15 years on…

Rich: That sounds like a lot of US breweries’ stories, too. But we Americans know very little about the craft beer scene over in Australia. What’s it like?

Dave: It’s really in its infancy but taking off quickly, with breweries popping up all the time. The craft segment is only around 2% of the market, but is the only growing segment of the beer market, so people are starting to pay attention to it. We can’t believe it’s taken this long. But at the end of the day the market is dominated by the dreaded yellow, fizzy lager…

Rich: Again - that sounds a lot like where the US craft beer market was 10 years ago. So… what inspired you to come stateside if things are starting to pick up down under? And what are you hoping to bring us that we haven’t seen yet?

Dave: Well, the States inspired us to begin with. Seems natural we should come back and join the party! For something new, we’re using Australian Hops, brewed with Australian Malt and water. The Galaxy hop is relatively new variety coming out of Tasmania, we happen to love its tropical fruit aromas and flavors… but there’s more to come. Stay tuned.

And I have to agree with Dave. Their beer is actually pretty different than a lot of what we see over here today, and they really know how to use those Galaxy hops well. There are a few beers here brewed with Galaxy, but I don’t think we quite have the mastery over them yet. But, when I tried the Australian Pale Ale, I was completely blown away. It may be bold to say, but the first beer it reminded me of was the Dogfish Head 90 Minute IPA, with a sweetness akin to the 120 Minute. It has tons of citrus flavors (Citra hops) and a subtle, but somehow different bitterness, which I can only imagine is due to the Galaxy hops. Do I taste passionfruit in there, too? Why yes! I actually feel like I could offer this beer to any serious hop lover and expect a wide-eyed “WOW” in response. It’s not an enamel removing IPA, but it is a big, balanced, masterfully-brewed, hop-focused beer.

The Hightail Ale has also been met with a lot of positivity here. It’s about as amber as an Amber Ale gets - huge, sweet toffee aroma, caramel and toffee flavors at first, with a very roasty aftertaste.  The head sticks around for the entire time, endlessly releasing the aroma. For me, that was my favorite part.

After talking to Dave, and trying the beer, it seems they’re in a pretty similar place over there in Australia. New breweries are popping up, and some of them really, really know how to make some fantastic beer, but they’ve got the same problems that we do, too. When I asked Dave about Fosters, he said that all the major beer brands over there are just like ours - low bitterness, low malt, low character beer that’s designed for repeated, unchallenging drinkability. Some Pintley members near LA also had a chance to try some of the beer and meet Dave, and apparently it was well received: They kicked all the kegs, and I got a few emails thanking Pintley for inviting them to the event! That’s a pretty good sign, to me!

Craft Brewers are building their niche just the same around the world as they are here, and its great to see that more brewers are being inspired by the US, and are looking to share their beer with us. We must be doing something right.

Other posts by Rich