Today is a huge day for Pintley! Just over 2 years ago, we launched the Pintley Beta with one simple goal in mind: to help you discover great beer. Now we’re taking the next step and bringing amazing beer right to your glass.

The brewers aged these beers with Massachusetts raspberries and Brett Yeast in locally-sourced Red Wine Barrels and California Brandy Barrels. Each hand-numbered pinewood box includes two 750ML beers, two hand-made wooden coasters, a piece of one of the barrels, and a signed letter from the brewers. These beers are exclusive to the project, and there will only be 900 two-bottle packages ever brewed! For more info about the recipes, check out the ONCEMADE page. 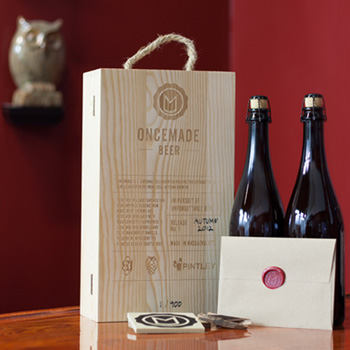 Pre-orders begin today at OnceMadeBeer.com, and we’ll be releasing the beers around September 17. Local pickup locations include Craft Beer Cellar, Boston Wine Exchange, and Night Shift Brewing; delivery within the 128-Belt is also available for a small fee.

So hurry up and pre-order now!

If you’re a Pintley user outside of New England, don’t worry! We’ll be launching ONCEMADE in your area soon. Click here to vote for the next ONCEMADE location and get notified when we launch a ONCEMADE chapter near you.

Other posts by Tim